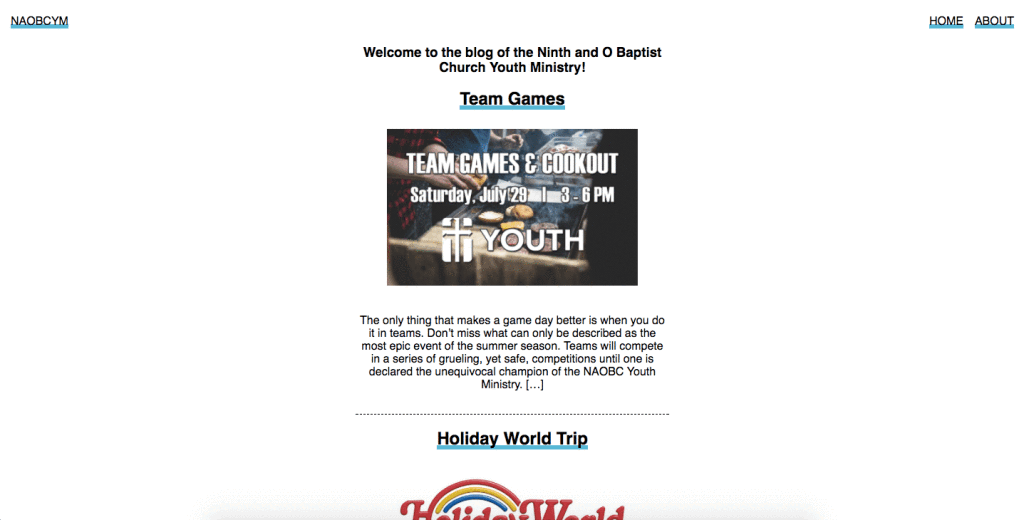 So, with that in mind I set out to build a small app that uses the WordPress REST API of a small site I maintain for my church (naobcyouth.org) as the backend, and then a small React app as the frontend.

Before you continue on, here’s a link to the finished project hosted through Zeit Now:

And then here is a link to the GitHub repo:

Please check it out!

Challenges and how I overcame them#

I come from Angular/Ionic land where everything is tied up in a neat little (weighty) Typescript bow, so the fact that React is so light took some getting used to. One of the first areas this came up was with routing.

I settled on using React Router as from what I could tell this is the most popular solution in the community, and my goal was really just to get a grasp on React, not spend a bunch time with routing.

Well, routing ended up being the thing I spent most time on (surprise)!

There were two major issues I ran into with routing:

1. How to pass data from page to page

In Ionic this is trivial. With React Router it really isn’t that difficult, either, but seeing as I was also learning React at the same time it held me up some.

This probably was the problem I spent the longest time with. One of the main issues I was facing is that clicking on the pagination links didn’t cause the component to re-render, and so my new data was never requested from the server.

How I solved it

Well, I did eventually figure out how to pass the data from page to page, but I decided just to make an API call every time someone went to a new page rather than passing the post data end. This seemed like a better solution as I didn’t have to worry whether someone typed in the URL to navigate to the page or not.

And as for pagination it was really a matter of figuring out more about the component lifecycle:

componentWillUpdate allowed me to check to see what my page property was, and to get the posts I needed for each page.

When I started the project I was using the Fetch API to get my remote data, but I ran into this issue where I wasn’t able to access my headers. I would console.log(res.headers) and I would see a Headers object that was completely empty.

This was no good at all. I needed those headers! The WordPress REST API sends back a response that has the total number of items, and the number of pages of items based on how many items you’re requesting per page (max is 100, default is 10).

How I solved it

Eventually, I sidestepped the issue by using the lovely HTTP client Axios which gave me everything I needed in one nice little object.

A few resources I used#

And there’s others I’m sure I’m forgetting!