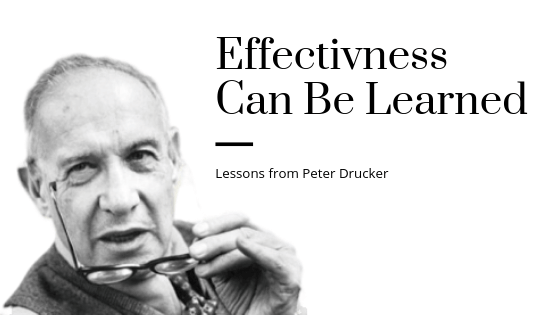 What exists in the darkness must be brought to the light. At times the best thing for a problem is to bring awareness to it. To speak its name, and hopefully by bringing it into the light a solution will begin to form.

Keeping that hope in mind let’s look at what Drucker says are the sources of ineffectiveness. Things he says he says, “cannot change. They are necessary conditions… of existence.”

Drucker gives us four reasons or sources for our ineffectiveness:

We’ll tackle each one of these in turn.

1. Your time is owned by others#

This has nothing to do with the 40 hour work week. Rather, it’s about how much of our time is spent reacting to events and people outside of our control.

There’s often not much you can do about this.

If your top customer calls, you pick up the phone. It’s what you’re paid to do.

Of course the dangers are not just without: if the CEO comes looking for a new feature to be built, you start building it. Other times there are meetings you cannot skip.

If one attempted to define an ‘executive’ operationally (that is, through his activities) one would have to define him as a captive of the organization.

A “captive of the organization.” That doesn’t sound good.

But that is how it feels sometimes, doesn’t it?

This becomes more pronounced in roles higher up the org-chart.

Lower level roles like software engineers (typically) have more control over their time. Something my CTO has said is that if you’re invited to a meeting, and you don’t think it’s relevant to you, don’t come.

That’s not an option everyone has. Some people work in companies where when you’re invited to a meeting you go: no ifs, ands, or buts.

This is doubly true in management positions. In those roles you have obligations to people above you, people below you, people in other departments, and outside stakeholders.

You’re surrounded, hostage to the whims of others.

You don’t or can’t take the time to rise above the situations and todos that come your way.

The fundamental problem is the reality around the executive. Unless he changes it by deliberate action, the flow of events will determine what he is concerned with and what he does.

It’s the battle of the urgent versus the important, and if we don’t take the time to figure out the difference between the two then everyday events will determine what we work on.

This is a problem of perspective. Things keep coming into your inbox, and they all seem important, they all sound urgent.

And to the senders they probably are.

But unless we begin to prioritize we won’t be able to tell the difference between a campfire and the Camp Fire. We will be busy putting out a few small flames when an inferno is overtaking us.

What the executive needs are criteria which enable him to work on the truly important, that is, on contributions and results, even though the criteria are not found in the flow of events.

David Allen talks about what he calls the horizons of focus. It’s a framework for aligning what you do day-to-day with your long term goals and vision for your life.

Next physical, visible actions to take on any project or other outcome; any single action to take about anything.

Outcomes we want to achieve that require more than one action and which can be completed within a year.

HORIZON 2: Areas of focus and accountability

Important spheres of work and life to be maintained at standards to “keep the engines running.

What do we want and need to accomplish, specifically, within the next 12 to 24 months, to make the vision happen?

What it will look, sound, feel like with successful implementation. Long-term outcomes and ideal scenarios

Ultimate intention for something, and the standards for its success. Why are we doing this? What are the critical behaviors?

Many of us are stuck at the level of calendar events and actions. If we’re lucky we may have a grip on the actual projects we’re involved in. If we’re lucky.

We have our noses planted firmly in the dirt, rather than the clouds.

If we’re gonna climb to higher levels of focus and achieve our long term vision we need to get a grip on our work and how to discern between the urgent and truly important.

3. You are within an organization#

Ultimately our effectiveness is determined “if and when other people make use of what [we] contribute.”

This can be difficult for the individual contributor to accept, but your effectiveness will be hampered if you don’t ensure your skills and insights are being utilized by others. It’s what you’re paid to do.

Unless the executive can reach these people, can make his contribution effective for them and in their work, he has no effectiveness at all.

The same is true for any team. If you are on a software development team, and the frontend developers aren’t able to use the work of the team developing the API, then, then those developers weren’t effective.

It does not matter if it is the most beautiful, elegant, well-designed code in the world. If people aren’t able to make use of it, then it isn’t effective.

4. You are within an organization#

Yes, this is a restatement of 3, but with a twist:

Every executive… sees the inside—the organization—as close and immediate reality. He sees the outside only through thick and distorting lenses, if at all.

Results ultimately come from without not within.

It is the customer who brings profits, we only can contribute our efforts. Because of this we need to work to ensure our focus is in the right place, but this is hampered by a centripetal force pulling our focus away from the outside towards the inside.

To take a clue from biology:

The larger the animal becomes, the more resources have to be devoted to the mass into the internal tasks, just circulation and information, to the nervous system, and so on.

Smaller organisms (and companies/teams) don’t have this problem.

Every part of an amoeba is in constant, direct contact with the environment. It therefore needs no special organs to perceived its environment or to hold it together.

Contrast the amoeba with a more complex creature such as a human and you can begin to see what happens as creatures grow in size. The complexity and energy required increases exponentially.

The same it is true with any organization, any team.

As companies grow larger they expend more effort and energy fighting internal entropy and inertia that pulls them away from what matters most: the customer.

The bigger and apparently more successful an organization gets to be, the more will inside events tend to engage the interests, the energies, and the abilities of the executive to the exclusion of his real tasks and his real effectiveness in the outside.

This is the key: our real tasks and real effectiveness are on the outside of the organization, but the pull is to direct them internally.

Those things that pull on us feel real. They feel like they’re what we need to, no, what we have to direct our interests, energies, and abilities towards.

The internal politics, the endless meetings, the late night emails. They feel real, immediate, and important, but they are not.

What’s real is on the outside of the organization.

Knowing is half the battle#

Yes, these are as Drucker says “necessary conditions,” but knowing is half the battle.

Once the problems are identified we can then begin to mitigate their effects.

If you don’t realize you’re sick you won’t begin to seek the cure, and Drucker has excellent medicine to prescribe to us that we will explore in future posts.